Lately, I have been seeing interesting captions under video thumbnails on the web site of a major Turkish newspaper, Hürriyet.

Here is an example: 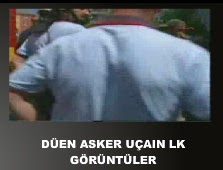 Here is what the caption under the image says: “DÜEN ASKER UÇAIN LK GÖRÜNTÜLERİ.” It should say “DÜŞEN ASKERİ UÇAĞIN İLK GÖRÜNTÜLERİ” It can be loosely translated as “first photos from the scene of the military plane crash”.

Notice the infamous Turkish dotted capital I (İ)s are missing from the text. Also missing are Ş and Ğ.

I don’t know why (I am guessing some OEM or Windows codepage involved somewhere) but Michael Kaplan would.

I am also not sure this is an internationalization issue: After all, this is the web site of a major Turkish newspaper and the application fails to display Turkish correctly. For the last month or so, I have been wondering when someone is going to notice and fix it but either no one cares or no one knows.