Here is one of my prized possessions, a Miniscribe Model 6053 MFM hard drive I saved from a dumpster at Cornell. 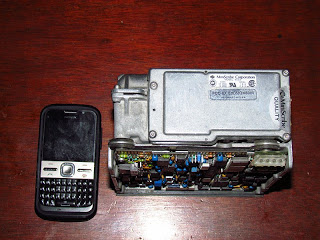 It is sitting next to my Nokia E5 phone with an 8GB Micro SD card inside.

Understanding that the distance we have traveled in the last 31 years was a function of the economic structure and not just engineering prowess will help you understand why while Russians made great engineers and scientists, the market was not flooded with cheap and useful Soviet computers once the wall came down.

It will also a give you a hint as to why there could never have been a second coming of Steve Jobs without some early decisions by IBM, and Microsoft’s subsequent success.