I love my car. I also seem to form attachments easily to inanimate heaps of metal, plastic, and circuit boards. So, I felt almost betrayed when the low-beam bulbs on my car went out within five minutes of each other. It wasn’t as bad as the time I had alternator trouble in a snow storm in upstate New York some 15 years ago, but, it was still something that had to be fixed immediately. One look at the headlight assembly and the user’s manual told me that I could either choose to get replacement bulbs and suffer through a couple of hours of frustration, with a real chance of failure at the end, or take it to the dealership.

The people at the dealership were extremely nice, treated this as an emergency, and squeezed me in between others’ appointments so I could drive that night. I got to enjoy some coffee, nice background music, free WiFi, and read some interesting papers on topological dissimilarity measures instead of getting my hands cut and scraped. Even though I ended up paying several times more than what the bulbs themselves cost, it was worth it. I could have done the work myself, but it was just hard enough that the experience probably would not have been enjoyable, and I might have ended up without the sense of accomplishment that is always the real payoff when you fix things yourself.

After all, I can occasionally see the benefit from having 8GB of memory on my MacBook Pro, but doing the upgrade provided that same sense of accomplishment (even though one of the screws went missing some time later).

Still, the MacBook Pro is not my main laptop. No, that would be my ancient Lenovo which is now a year older than the last time I complained about not being able to bring myself to get a new one.

Basically, even though I can agree that the insides of this machine are clearly behind the times, I can’t find a machine that combines all the external characteristics I value even more at a reasonable price.

I really don’t want a chiclet keyboard. I can’t remember gestures and swipes and all that jazz, but I want a touchpad that is small and sensitive enough that I don’t have to move my fingers much to navigate the screen. I want the touchpad buttons to be where my thumb naturally goes so I can choose whether I want a right-click or a left-click without much effort and thinking.

I want to be able to install Linux (specifically, ArchLinux on it), with audio and wireless networking working without much effort.

And, I do not want to pay through the nose for it.

As far as I can tell, such a beast does not exist.

But, the beast in me has been pushing for me to do something, anything.

So, it was with that internal nagging that I found myself looking through Lenovo forums. One thing lead to another and I don’t know how, but I eventually found myself looking at a post pointing out the list of CPUs that would work with my Lenovo 3000 N100. Wait, what? The Apple store in Chelsea requires me to get permission from a genius before they can decide whether I should be allowed to procure a screw, but I can just get a new CPU and drop it in my Lenovo? Surely, you must be joking.

See, I had never really paid much attention to the cover behind which I knew was the fan. But, the only time I opened that cover was when I was trying to clean up after having spilled a large mug of hot Turkish tea all over the computer (these things have a way of happening to me), and I had failed to notice that tucked in the same compartment was the underpowered Core Duo T2300E CPU. So, I turned off my computer, and went exploring.

The first thing I found was a pad of dust that had accumulated between the fan and the vents. This half-inch thick thing which I looked like a filter that was purposefully put there did explain why the fan was working over time whenever I converted some videos from my camera’s mov format to Xvid compressed avi files using ffmpeg.

Removing the fan, and cleaning the accumulated dust, and turning the computer back on was a rewarding experience. After all, that’s why I like programming: Instant feedback.

Here’s how things looked after the clean-up: 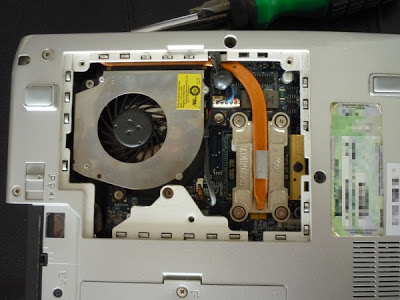 Long story short, I found a Core2 Duo T7200 on Amazon. That would give me a top CPU speed of 2 Ghz instead of 1.66 Ghz, the L2 cache would go from 2 Mb to 4 Mb, and I would gain the ability to run install a 64 bit operating system on this machine.

I ordered the component from a company with the fictitious sounding name Mega Micro Devices, Inc. via Amazon, and got it via free shipping in a couple of days.

I was really eager to try it out, so I forgot all about taking photos and all that. I did take a screen shot of CPU-Z running on the old CPU: 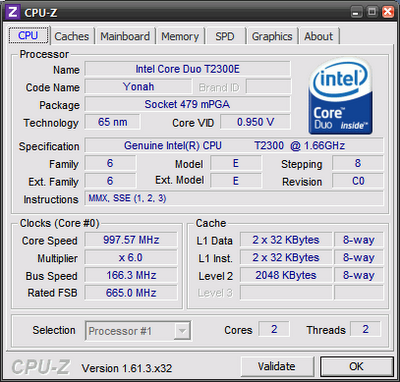 Before the first boot, I did remove the hard drive, just in case. The first boot was done using a CentOS rescue USB disk I had lying around. The BIOS immediately recognized the new CPU, and CentOS booted with no problems. After booting into Gnome and running Firefox a little, I was eager to put the hard drive back in and boot into Windows XP.

And, I did. Everything seemed OK, so I did some video encoding while watching some campaign ad videos on YouTube. Still fine.

Now, in most cases, the maximum speed of the CPU in this system does not make much difference because it is not running at top-speed anyway. In fact, both the old one and this one go down to 1Ghz when not much is happening. Still, when something does need the extra speed, like encoding videos, I get that extra, and the task completes faster.

The CPU upgrade nicely rounded the memory and hard drive I had already put in to this laptop. For the combined cost of these three components, I could have gotten a low-end laptop with an i3 or i5, but that would have meant using a keyboard I hate, and looking at a screen with all sorts of reflections and not enough vertical real estate. And, I would have ended up with a smaller hard drive. So, no thanks. I’ll wait.

And, here’s the CPU-Z screen shot after the upgrade: 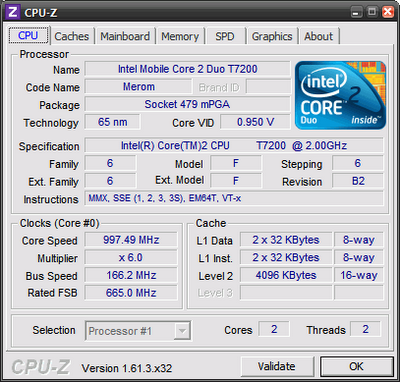 Now, the next task is to install the 64-bit ArchLinux distribution.

I derive a lot of happiness from being able to tinker with things like this. Call me old-fashioned, but the sealed systems with everything soldered on I see out there really do bother me at an emotional level. How do you feel?