I still haven’t been able to bring myself to abandon my trusty old Lenovo laptop. It’s been about 30 months since I last talked about the fact that I cannot find a reasonable replacement for it. I care mostly about the keyboard and screen aspect ratio. This one has enough keys in the right places. And, while the 1280x800 resolution is not exciting, it does allow me to do things. When I look at the current laptop market, I am really depressed to find machines that will not give me much more memory (ok, I’ve stuffed this one with 4 GB), definitely not more hard drive space (yup, I picked up a really cheap 750 GB Western Digital Scorpio Black at some point) for outlandish prices because they have fancy screens and a cramped little SSD.

OK, so the Core 2 Duo T7200 CPU (also upgraded from the original) is not a performance monster, but then I don’t play many exciting games and most of my work gets done on remote Windows or Unix servers. For that, I just need a machine where I feel comfortable … I still haven’t found one. So, I have kept this one.

I loved Windows XP SP3 with my custom theme. I had everything set up just the way I like it in that environment. But, alas, Microsoft is terminating support and while I seriously trust the Comodo Firewall way more than any Microsoft patches, it was time to move to a newer version of the OS. I made the not so seriously thought out decision of ordering the Windows 8.1 Pro OEM DVD from Amazon. It comes with no support, but, then, I have never ever needed Microsoft support for anything. I am definitely willing to provide myself with support. And, this machine really qualifies as “original” equipment ;-)

I did go through the machinations of backing up everything, but, ultimately, I was really positively surprised by how easy it was to stick the DVD, boot up, click a few buttons and end up in the new environment. The hard drive has three partitions, one about 90GB dedicated to Windows, another one about 600GB dedicated to all the stuff I have accumulated over the years, and the rest of the space is taken up by my ArchLinux installation. The Windows 8 installation process only touched the Windows drive. I now have a Windows.old directory that is 40GB in size … some cleanup is definitely in order.

Also, I haven’t figured out how to regain the ability to boot into ArchLinux. Given that this computer does not support so-called secure boot, I doubt that’s going to be difficult.

I did install Visual Studio 2013 Express for Windows Desktop, only to find out I was not able to compile GVim using that. I then went back and installed the Windows 7 Platform SDK, and building and installing the 64-bit version of GVim was a breeze.

Perl 5.18.2 is being compiled from source as I write this. I am not too thrilled about the warnings regarding size_t and IV conversions, but then this is the machine on which I try things out. 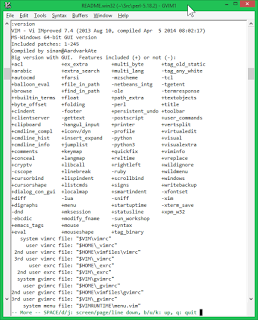 Unfortunately, the build didn’t succeed due to the following test failures:

I will investigate those later, for now, that perl is getting installed!