Without exaggerating too much, let’s just say I was very happy when I was able to boot into good old ArchLinux on my old laptop after upgrading to Windows 8.1. It does, of course, make things much, much easier that this is a BIOS based system without all the convoluted stuff.

The process was actually rather trivial … I booted using the current ArchLinux install image, mounted my Windows C: drive on /media/win, mounted my ArchLinux partition on /mnt, used arch-chroot to chroot to /mnt. Then, following the instructions on ArchWiki, installed GRUB to the partition containing my ArchLinux installation, copied the partition’s boot sector as a plain file to C:\, rebooted, and used bcdedit to create a new boot menu entry, again, following the instructions in ArchWiki.

The whole thing took no more than five minutes. 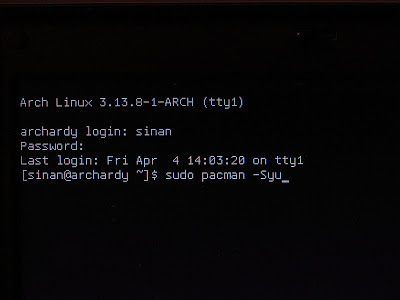 Because I already had a working GRUB installation from when I was using it to dual boot between Windows XP and ArchLinux, running grub-mkconfig -o /boot/grub/grub.cfg again resulted in four entries in my GRUB boot menu, three of which were now unnecessary because I am using Windows to select which OS to boot into (I did not want to take any chances with using GRUB to dual boot between Windows and Arch.)

One inconvenience when you use this method is the fact that the choice of OS happens after Windows 8.1 has essentially finished loading. Choosing ArchLinux then results in a soft-reset whereby Windows starts the ArchLinux boot process. Compared to having GRUB manage the process, this ends up taking an extra 40 seconds for the Arch login prompt to appear.

Well, there is, apparently an App for that (hat tip APC magazine).

I am not going to install it, but FYI.