I saw an acquaintance the other day: An old Acer Extensa 4420. Originally, the system came with 512 MB memory, and a 120 GB hard drive which Vista immediately filled to the brim. The underpowered CPU overheated pretty quickly, and it was generally a hassle to use, but it did have a 14“ 1280x800 screen which is much more bearable than the stupid 1366x768 you get for low end machines these days.

Now, with a 2.2Ghz CPU and 4 GB RAM, it runs Vista nicely, but really shines when you boot into Linux. It will never be whisper quiet during software updates, but during normal use —mostly sitting on a desk, occasionally being lugged to another location— it does the job.

Except, the stupid Broadcom Wi-Fi card that came with the thing couldn’t maintain a decent connection to the router, going down to 5.5 Mbps just feet from a router to which every other computer I have tried can maintain 72 Mbps when needed.

When I saw an Intel 4965 AGN full size Mini PCIe card going for $9, I wondered whether it would work OK on an AMD motherboard. After all, if standards mean anything, it should.

For nine dollars with free shipping, it was worth giving it a shot.

Once in ArchLinux, the connection was not up. Oh, of course, the Wireless connection is not wlan0 now, it is wlp5s0 or some such. Fix that in the netctl profile, restart the service via asystemctl, and it connected to the router at 72 Mbps (the router is old as well).

Update: Got a chance to try it with a better router: 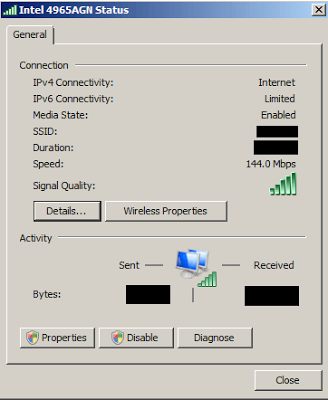 The card works beautifully both in ArchLinux (using netctl automatic profile switching), and in Vista. It no longer drops or degrades connections while browsing, or streaming videos, or in the middle of large software updates.

I found out later that this was not guaranteed to work. See Intel’s “Why doesn’t my laptop recognize my new Intel wireless adapter?”:

It looks like an Apple mentality is taking over the computing industry.