So, I ranted a little. That reduced my stress levels, and I decided to get back to fixing a single line in t/basic.t in App::Cmd.

I am assuming Dist::Zilla::Plugin::Git failed because I didn’t have git in my %PATH%. So, I’ll fix that when everything else installs. …

I know I should not be whining, but it is frustrating that I am only going through this because I want to fix a hard coded path in test case, and I want to make it easy on the people whose work I use and appreciate.

I know that’s asinine, but it is frustrating:

And, after that, I get this:

t/commit-build-src-as-parent.t .. 2/8 ssh: Could not resolve hostname c: Name or service not known fatal: Could not read from remote repository.

There is now a weird directory in the build directory.

With that out of the way, Dist::Zilla::Plugin::GithubMeta has an issue with the fact that I have a github entry in my $HOME/.ssh/config.

After a simple change:

And, this is the change:

Here is the pull request, finally.

Now, I need to go back and submit patches for some of the other problems I encountered during this saga. 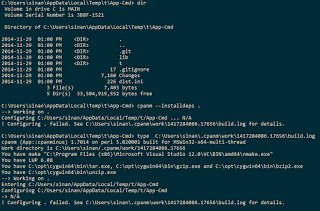 I don’t want to sound ungrateful right after Thanksgiving, but, it could have been a little easier to submit that bug fix. I also think RJBS does know better than to hard-code paths without regard to portability. In fact, I would assume the authors of all the modules whose tests hard code various paths, and interpolate strings into regex patterns know better. I am at a bit of a loss for words, frankly.

I started down this path because I wanted to cpanm Dancer2 which failed because of the hard-coded path in a test in App::Cmd. And, Dancer2 still has not been installed.