I have always wondered why some people feel Perl has to suck for their choice of language to be valid. It looks like there are a bunch of people who just try to satisfy their need for approval by seeking what’s most popular, and trying to hitch their wagon to that train. I do not know what they can gain by this, but they exist.

Yesterday, I noticed a post on HN which linked to a Google trends comparison of Perl and Python: 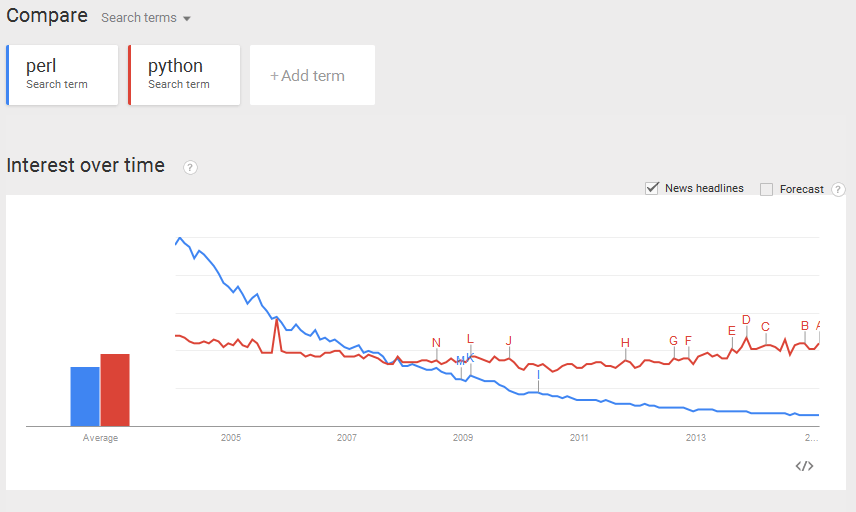 If the person who posted this to HN had just hovered the cursor over the little question mark next to the title “Interest over time”, he might have seen:

Numbers represent search interest relative to the highest point on the chart. If at most 10% of searches for the given region and time frame were for “pizza,” we’d consider this 100. This doesn’t convey absolute search volume.

… and, then, maybe read the linked help page:

Each point on the graph is divided by the highest point and multiplied by 100.

That brings us to the following simple truth: Probably no programming language is going to ever be as popular as Perl was at the turn of the 21st century: There are now so many more of them that people can easily pick try out on their own computers. This is a completely different environment that the one in which Perl’s popularity reached extreme heights. For one thing, back then, we used to have to download things over slow modem lines (my transition from 2400 baud to 56 kbaud dialup access is a blur now, but it felt very real at the time.)

It is pretty much impossible for Perl to ever measure 100 again on an index that chooses as its basis the highest volume ever achieved. It is a different world.

But, of course, I am getting carried away, assuming the Google trends comparison means anything. Here are a couple of other display elements the popularity seeker might have clicked on: 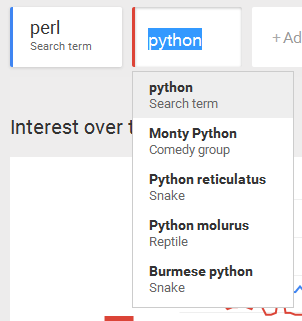 That is, as everyone ought to know, while Perl is a rather more programming specific term (I really did not know about that town in Germany), the word “python” can appear in many very popular non-programming contexts: 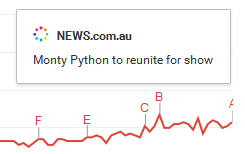 This brings us, as I mentioned in my tweet, to “programming”:

It turns out Python is more popular than programming itself.

Or, if you look at numbers for “python” without October 2005 which is where it reaches its peak, the trendline is flat. If you take this graph at face value, the popularity of Pyhton has been flat for a little more than a decade … Except for the Monty Python reunion and the escaped python in Canada.

One of the reasons I ended up learning Perl was the fact that it came with enough documentation that with a good book by your side, and perldoc on the command line, you could answer almost all your questions yourself. Even the sorriest POD was better than anything else that came with any other language except, maybe, for the info system that came with DJGPP.

But, I digress … The more important observation is the fact that 2004 and 2015 are very different time periods. In 2004, the intarwebs was still a rather techie phenomenon. At the time, one might still have thought of AltaVista as a thing. Today, people, despite how crazy it makes me, don’t type URLs: They search everything on Google, and click the first link that comes up.

Being online is no longer a techie phenomenon. Therefore, programming related searches will decline relative to their peak a decade ago. No one would claim, on the basis of this Google trends analysis that programming is less important today than it was in 2004. However, there are so many more people searching for so many other things online that its overall decline among search terms is inevitable.

Trying to legitimize your choice of programming language by an appeal to Google trends popularity is a losing battle. Perl has been wonderful to me in terms of getting done what I needed to get done with minimal pain. On the other hand, it is not the language I use most often. I end up spending most of my time writing SAS macros. Or, doing maximum likelihood estimation in Stata.

If, however, you take Google trends, or any measure of programming language popularity based on people searching online for copypasta code to pass their intro programming classes seriously, you must also take the following graph seriously. Compared to Java, Perl, Python, and programming in general are so insignificant that their differences barely register on the time series graph: 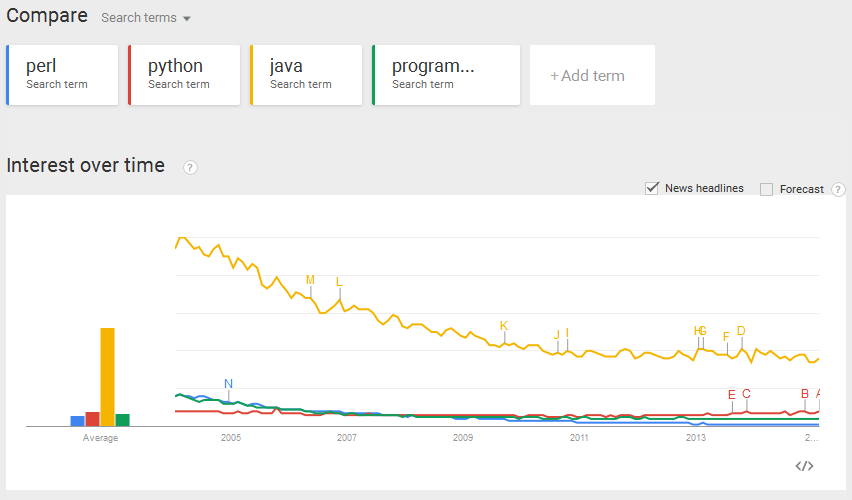 All hope is lost.