The GHCN is the benchmark database which NOAA’s NCEI uses to make statements such as:

These kinds of statements have always intrigued me. As an economist, I am acutely aware of the problems involved in data panels which enable legitimate comparisons between points in time to be made. Given that humans did not use stratified sampling methods to measure temperatures consistently at well defined locations, I am not convinced how much one can rely on these proclamations of “highest temperatures” in recorded history.

The data set itself is available on NOAA’s web site, and is updated regularly. In the past, I have tried to visualize average temperatures:

and where on earth those temperature measurements come from:

Today, I am going illustrate how you can explore this data set using Perl, SQLite, and SQL.

The current snapshot of the QCA data set I downloaded stands at 462,967 lines where each line contains a year’s worth of temperature measurements from a given temperature station. Temperature values are encoded as integers representing the monthly average temperature in hundreths of a degree Celsius. For example, a value of 1234 stands for 12.34°C. Missing values are represented as -9999.

I am kidding, of course: There are no observations in the GHCN from Göztepe in the year 2015. For some reason, the most recent observation from this location is December 2013. It is not like the State Directorate of Meteorology stopped measuring in Göztepe. There is a new automatic station there that does not appear in the GHCN. And, just like that, İstanbul no longer enters the GHCN.

So, how can you get started finding out whether your country, city, or airport is included in the GHCN?

That’s about 12 MB. While you are at it, also fetch the README and the country codes.

The downloaded archive will include two text files. The .dat file contains the data, and the .inv contains meta information about the temperature stations that appear in the data set. A long time ago, I combined this information to put together temperature graphs for each location in version 2 of the GHCN—Maybe it’s time to update that ;-)

The following short Perl script will reshape the data set so that each row is a single temperature observation:

which you can run using the command line:

Then, you can import these observations into an SQLite database using the following:

Then, you can run queries against it to your hearts’ content:

If you want to calculate averages, you should make sure not to include those -9999 values:

Also, as you can deduce from NOAA’s statement above, we are only interested in observations since 1880:

NOAA’s figure of an average temperature of 14.0°C for the 20th century is for the combined land and ocean average, and the GHCN only contributes to the land part of that. I am not looking at ocean temperatures here.

Keep in mind that some station ids may appear multiple times where histories are distinguished by an index. For example, Riviere Du Lo has up 10 different variations in some years:

That would mean this station in Canada would be given 10 times the weight of Palmyra:

There is no way of dealing with these multiple histories that does not involve some sort of trade-off. But, averaging is a quick and easy way out, so the average of October 1996 temperatures in Syria and Canada comes out to be about 13.34°C rather than 7.29°C:

GHCN monthly also includes observations from ships and Antarctica. I am not 100% certain, but I do not think those are included in the global land average. So, let’s get rid of those:

where the difference between October 2015 and the 20th century average for October temperatures ends up being about 1.22°C, a full 0.11°C lower than the figure in NOAA’s announcement.

I am not sure regarding the source of the difference, but note that the data set I am using was generated 21 days ago, so new observations may have been added in that time. I am not sure what has changed, and there really isn’t an easy way to get the exact data set on which NOAA’s “State of the Climate” reports.

I am more interested in data source heterogeneity than in average temperatures. You can see in my animation of station locations that, over time, there are more observations from some countries than from others.

While, the U.S. is just 2% of the world’s surface area, temperature stations in the U.S. are over-represented in the “Global” Historical Climatology Network:

If you look at data for the 21st century, the picture changes a bit:

Here are some graphs which I hope demonstrate why I am concerned about uncontrolled data source heterogeneity:

Number of countries in the GHCN by year 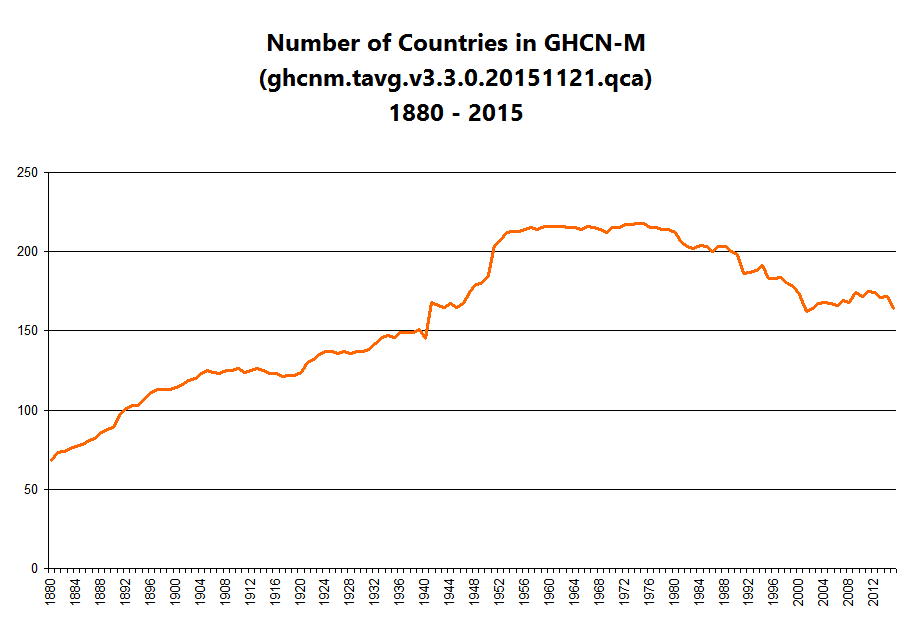 Number of stations in the GHCN by year 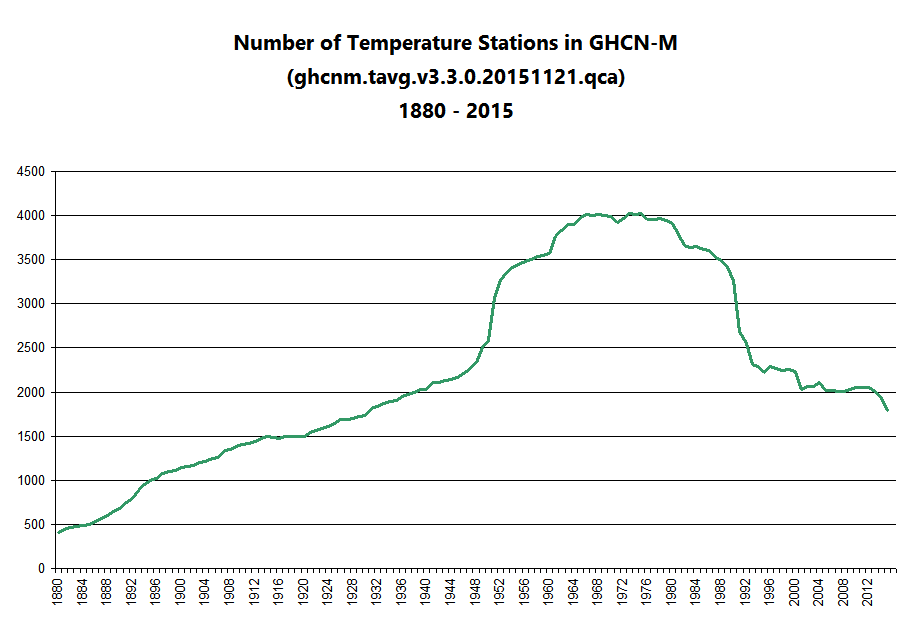 Number of observations in the GHCN by year 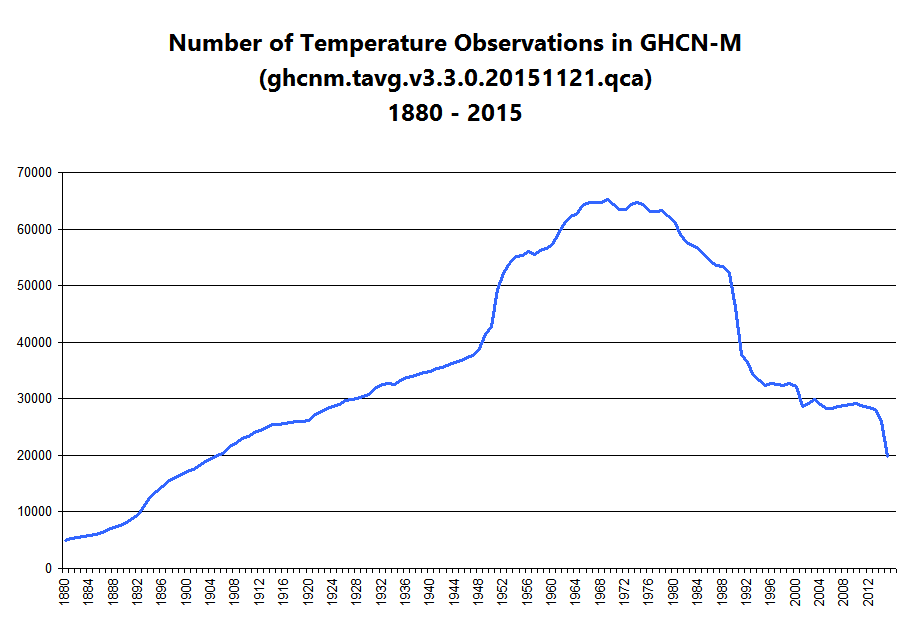 Average annual temperature in the GHCN by year 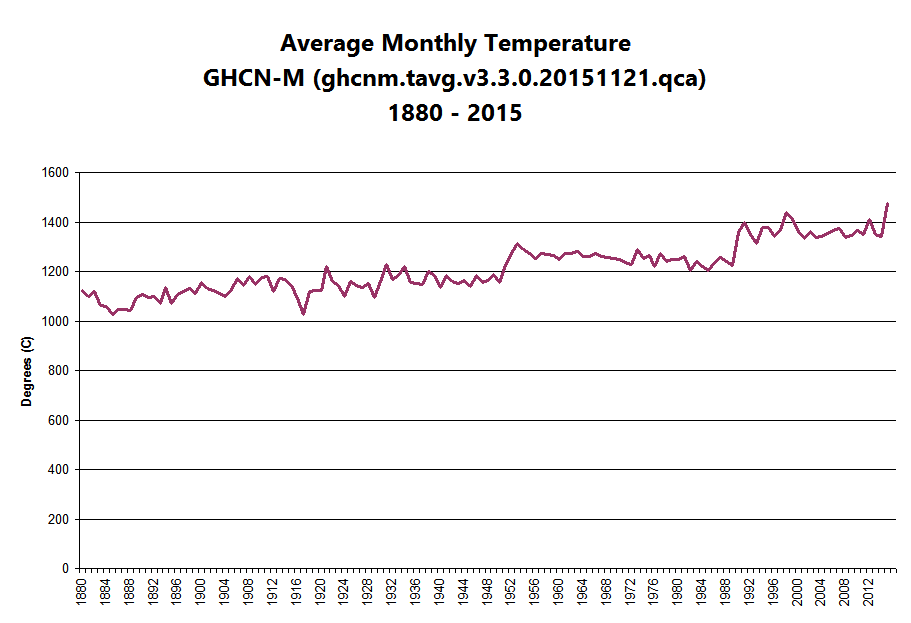 Looking at that last graph of annual average temperatures, note the obvious discrete jumps in 1950 and 1989. Then, take a look at the graph of number of observations by year, and notice that the pimple in the middle basically corresponds to that same period.

I find this interesting.

So, now you are familiar with the benchmark database of land surface temperatures which NOAA uses to make pronouncements about global warming. It might be useful to approach this set of numbers and dig around during the period leading up to the Paris climate change conference.