My unhealthy attachment to an old laptop continues. After upgrading the WiFi card, I ran into a very reasonably priced Intel Core 2 Duo T7600 on Ebay. Yup, the T7600 is only a 16.7% improvement in top speed over the T7200 I had already upgraded to … Yup, There is practically no way to notice the improvement in regular use where my CPU stays at 1 GHz anyway. But, the pull of the temptation to put in the fastest CPU that I could conceviably put in this machine was too strong. Keep in mind that Lenovo’s maintanence manual does not list the T7600 as supported. It stops at the T7200.

First, a few warnings: I am just relaying my experiences, and definitely not recommending that you open up your machine, and fiddle with the insides, unless you feel completely comfortable with the possibility of zapping, burning, or otherwise breaking something accidentally. Also, if you get thermal compound on your fingers, don’t rub your eyes with them, don’t inhale isopropyl alcohol fumes, protect your eyes, don’t breathe in the dust created by applying a rotary tool to screws … Basically, take proper precautions if you try any of this. Nothing I say here should be taken as instruction, and all information is provided for entertainment purposes only.

The upgrade from the T7200 to the T7600 itself was uneventful. The CPU arrived a couple of days after the order, I opened up the laptop, cleaned the heatsink contact surface and the CPU using 91% ispropyl alcohol and coffee filters, popped the new CPU in, and applied some thermal compound onn the contact surface. Previously, I had used the venerable Arctic Silver 5. This time, I decided to try the Arctic Silver Ceramique. I am not the best at applying thermal compound, but I thought I did OK.

After putting screwing the heatsink on, flipped the computer over, and turned it on. Everything worked.

After using the computer for a while (the compound takes 25 hours and several temperature cycles to achieve full effectiveness), I noticed that even at the lowest speeds, the CPU was running about 5°C warmer than the previous one. I understand that this particular machine’s cooling system was not designed with a T7600 running at 2.33 GHz, but I saw no good reason for the difference at the lower speeds. I thought maybe I hadn’t applied the compound very well, or maybe I had screwed the heatsink screws too tightly, causing the compound to squish out from between the heatsink and CPU contact surfaces.

It did not take too long to figure out I had screwed the heatsink on too tightly. It took even less time for me to strip three of the four Phillips screws holding the heatsink in place. The screws have springs around them, and, apparently, if you apply too much force, you’re done!

First, I went looking for replacement screws on Ebay, because even if I could figure out how to take the screws out, I did not want to put them back on :-). I found very cheap replacement heatsink with a set of screws on Ebay, and decided to order that. I figured I would put up with the stupid fan for a few days while waiting for the package.

The heatsink actually arrived much quicker than I had expected from free shipping from an Ebay seller. However, very disappointingly, there were no screws in the package. Given how cheap it was, I decided to just contact the seller to let them know. I really did not think it was worth it for them to send me a replacement. But, to my pleasant surprise, the seller immediately responded, and told me they’d be sending a replacement immediately, free of charge. Lo and behold, just another couple of days later, a new heatsink, this time with a complete set of screws, showed up. I was very impressed by how good the screws looked compared to the ones I had destroyed even before their destruction. 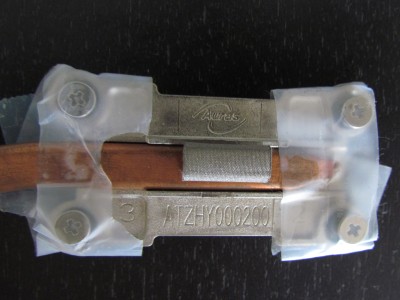 Then, it was time for my Black & Decker rotary tool to come out. I decided to cut across the heads of the stripped screws to create a groove so I could use a flathead screwdriver to unscrew them. 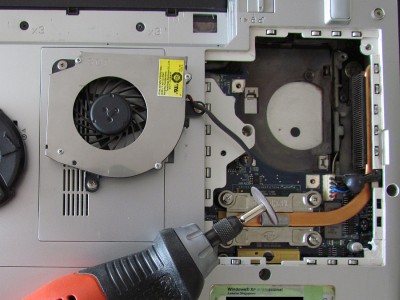 It worked OK. I don’t have the most stable hands, but a few minutes later, I was able to remove the screws. The process produced some fine screw dust which I cleaned using compressed air outdoors. I then wiped the surfaces for good measure. 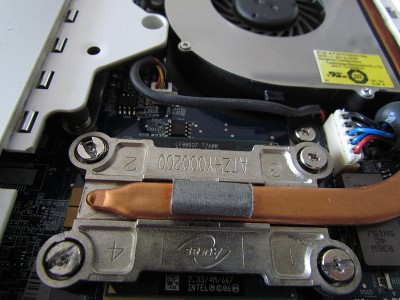 Removing the heatsink proved that I had definitely used too much force: 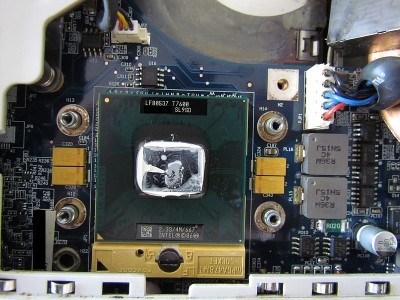 Again, I cleaned the CPU and heatsink using 91% isopropyl alcohol and coffee filters. 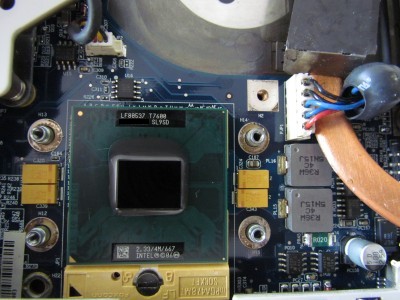 For the re-application, I decided to go back to the Arctic Silver 5: 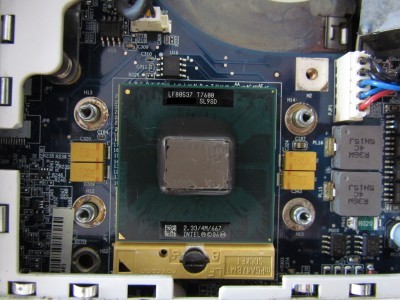 I was extremely impressed by how quickly PCPartsOutlet responded to my note, and sent me another heatsink. I generally have good experiences with sellers on Ebay, but this experience was exceedingly positive. I thoroughly recommend them if you are looking for various computer parts.

Time will tell if I’ll get lower temperatures after this, as the instructions for Arctic Silver 5 state:

… the compound thickens slightly over the next 50 to 200 hours of use to its final consistency designed for long-term stability.

So far, things are humming along at slightly lower temperatures (around 44°C rather than 46°C at idle) than I had achieved with the over-tight heatsink and Ceramique.