I am really attached to my clunky old Lenovo 3000 N100 laptop. Of course, other than the motherboard and the screen, the computer on which I am typing this has little in common with the specifications of the original machine. The potential of this laptop is limited by the stupid Intel 945 chipset, but there is not much I can do about that.

In the past, I have upgraded the CPU from the original T2300E to the T7200, put in the fastest memory I could, and upgraded the hard drive from an 80 Gb weakling to a roomy WD Scorpio Black.

I have been eyeing the T7600 CPUs that are beginning to appear at reasonable prices, but I feel a slight improvement in the top CPU speed is not going to be noticable unless I also upgrade to an SSD that has more room than my current set up. I have been hesitant to do that due to my fear of messing up my satisfactory Windows/Linux dual boot set up.

But, sometimes, I get the itch to tinker with hardware, and I have to scratch it — one hopes without breaking anything.

A few days ago, I discovered the easiest fix when I noticed extremely reasonably priced Intel Network 7260.HMWG.R cards on Amazon.

When I took a look at it, Amazon also showed me a Half to Full Height Mini PCI Express(PCI-E) Card Bracket Adapter which eased my worries about moving from a full size card to a half size. I read some posts about people’s troubles with the card, and noticed most of them seemed to have been solved by the latest drivers.

The itch was killing me. I ordered one, along with the bracket adapter.

Oh my … This thing is small: 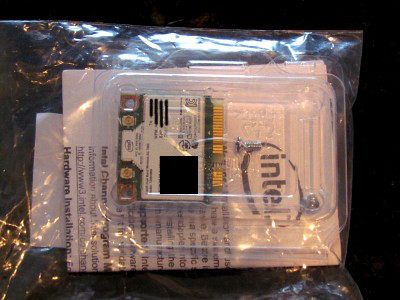 Before replacing the previous card, I removed the device from Windows’ device manager. I also downloaded the latest drivers for the 7260, just in case. Then, turned the power off, removed the battery, and opened the cover that protects both the hard drive and the wireless adapter. 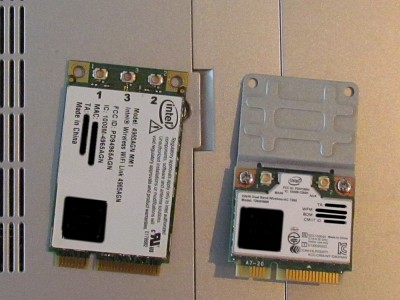 The most difficult part was attaching the 7260 to the bracket adapter with those tiny screws. Once I got that, I inserted the card, put in the screws, and re-attached the antenna cables. I had been worried about whether they would reach, but they did. Phew! 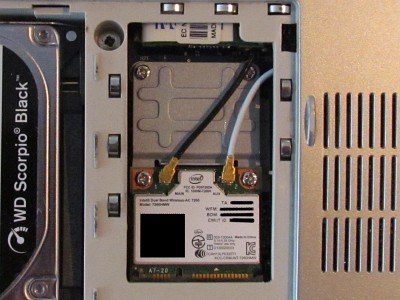 Then it was time to close the cover, insert the battery, plug in, and turn the computer on. No crazy messages about disallowed hardware, immediate boot into Windows 8 log in screen.

What is that I see in the corner of the screen?

It is a WiFi icon with a star overlay indicating that connections are available.

Could it be??? Yes, my Windows installation already had the latest drivers. 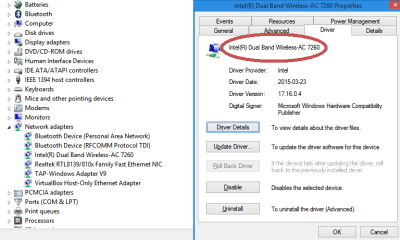 After I typed in the WPA key for the network, it immediately connected at 300 Mbps. 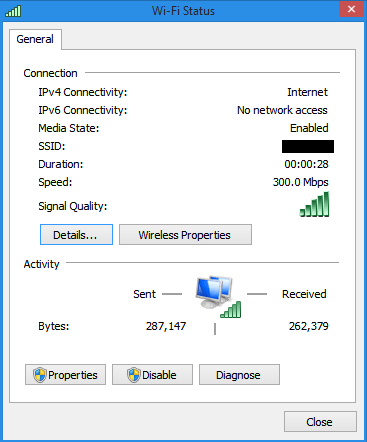 The highest I had been able to achieve with the previous card was 144 Mbps with the same router.

Of course, that doesn’t mean my actual download speeds have improved by that much. With the old card, the best I could get downloading one of Linode’s speed test files was about 3,032K/s. Right off a fresh boot, I got 3,352K/s average with a peak of about 3,400K/s. That’s about a 2 Mbps improvement over the old one.

But, the real improvement seems to have been in the heat generation department.I cannot quantify this because I hadn’t made any temperature measurements before installing the 7260, but I am struck by how the fan is no longer kicking in unless I am compiling something. With the old 4965, the fan would kick in the moment there was any network activity. And, the bottom of the laptop seems much less warm to the touch.

After a full day of regular use, I also noticed that there seems to be an approximately 10% improvement in battery life which is quite respectable.

With everything working perfectly on Windows without needing any intervention from me, it was time to boot into my ArchLinux install, and see what surprises lay in wait.

I am happy to report that it was completely uneventful.

The card was automatically recognized, assigned wlan0 (because that’s what I like), and the wireless network automatically joined, all thanks to the excellent Netctl package.

We really have come a long way since the first time I installed a network adapter a few decades ago.

I know some systems do not allow users to replace parts willy nilly, but, if you have been holding on to your Lenovo 3000 N100, I see no reason not to upgrade your wireless card to a 7260 — of course, after upgrading your CPU to a T7200 ;-)

Keep in mind that if you do decide to fiddle with the internals of your computer, you might damage stuff (I hear static electricity can be quite the mood-killer). If you do decide to get in there, you do so at your own risk.

PS: The card also has Bluetooth. I am not sure how that will interact with the built-in Bluetooth in this machine, so I did not install the drivers for that at this point. If I do try it out (and I have very little incentive to mess with what seems to be working perfectly fine right now), I will write about that, too.