This time, it happened while I was working on something. I was typing something, nothing particularly demanding was going on in the background. All of a sudden the screen went blank and all the indicator lights turned off. About a dozen different attempts at bringing it back to life did not pan out.

Luckily, I had a USB-SATA dock lying around, so I was immediately able to verify nothing had happened to the hard drive.

What to do now that my last BIOS booting system kicked the bucket … again!

First, I wrote an actual physical letter to Lenovo explaining how two similar models had died in exactly the same way for seemingly no reason at all, asking if they had an explanation. I haven’t received a response yet. Not surprising considering I was probably one of the three people left on this planet still carrying around a Lenovo 3000 N100 chasis.

Then, I went on Ebay to see if Goodwill Maine had another one in mint condition. It was too much to ask. They didn’t, and what everyone else had, I saw no reason to spend any money on. Goodwill Maine did have a Thinkpad T400 on their hands, and it looked good. I also realized the two 4GB memory sticks left over from upgrading my 2010 MacBook Pro to 16GB would work on this system: Good. The 3000’s motherboard did not support more than 3GB, and even though I did nothing demanding on it, it was starting to really annoy me. On the down side, the T400 comes with a “whitelist” in the BIOS that prevents you from using wireless cards not allowed by Lenovo. That was something to take into account, but the card this machine came with was not useless if my efforts to remove the whitelist did not pan out. 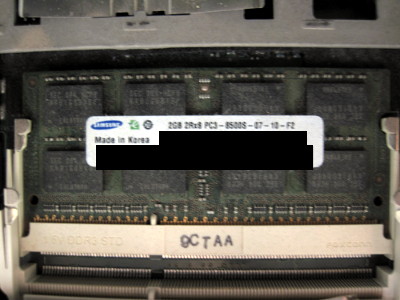 I did realize that with a 2.26Ghz clock speed and only 3MB L2 cache, the CPU in this laptop would be slightly weaker than the T7600 I had put in the 3000. Luckily, there was a very reasonably priced P9700 available, and I grabbed that as well. At 2.80Ghz and with a 6MB L2 cache, it would at least make me feel like all of the work was not for nothing. Also, as it turned out, it runs the nbody benchmark in 10 minutes. That is almost as good as the 5th generation Core i3 CPU I have in my other Windows laptop.

I had to wait through an auction on Thanksgiving, but eventually everything arrived. First, I took out the old 2GB memory stick, and put my 8GB in, and slid the hard drive from my now dead computer in the bay. Then I just threw caution to the wind and turned it on. The system booted in to my 64-bit Windows 10 Pro with no problems at all.

Well, except for the fact that I got my first ever prompt to activate Windows. Panic set in … I had upgraded the Lenovo from XP Pro to 8.1 Pro to 10 Pro. I had bought the official Windows 8.1 Pro install DVD on Amazon … The license key was on the sleeve and I had no idea where that was. A call to Microsoft confirmed that I had to find that.

Several hours later, I found it tucked away under a whole boatload of crap.

Along the way, I realized that the battery that came with this laptop had only about 9% wear, and it was lasting about four hours. I had no right to expect not to have to buy a new battery pack, but I wasn’t going to have to. And, the A/C adapter from the 3000 works fine with the T400.

Next, I decided to see if someone before me had removed the BIOS whitelist. I installed the Intel 7260 card and, of course, I was greeted with the infamous 1802 error. After hemming and hawing about the wisdom of this, I decided to try one of the less dodgy looking modified BIOSes floating around on the web. I do not endorse this and no one can guarantee that your laptop will survive if you try it, but it worked for me (after upgrading the machine to the most recent Lenovo BIOS using the official bootable CD image). To flash with the modified BIOS, I installed FreeDOS and the contents of the RAR file containing the modified BIOS image on a USB drive and did the deed. I tried to check hex dumps of various areas against a known image beforehand, but I still removed the hard drive during the flashing, just in case.

The updated BIOS I used came in the archive

If you decide to try this, you should be aware that there is no guarantee it will work. You risk various bad outcomes such as bricking the laptop or installing a backdoor or worse. People might put viruses and other malware in similarly named files and distribute them. That’s why I am providing the hashes of the file that worked for me. So far, everything seems to be OK, but I really have no way of knowing for sure. I do not recommend this and nothing I say should be construed as such. I am a curious person willing to try things and not complain about the consequences if something goes wrong.

With the memory, the hard drive, the wireless card, and Windows 10 working perfectly, it was time to see if I could boot in to my ArchLinux install. Things seemed to go OK for a few seconds, but then everything got stuck. Of course, the kernel image it was trying to use had been built on a laptop whose BIOS disabled the AHCI support of the chipset. So, I rebooted, and picked the fallback image from GRUB. While I was looking up the correct set of options to re-run modprobe, I decided to take the lazy way out, and did a sudo pacman -Syu. Thankfully, there was a kernel update which regenerated both the default and fallback images. After that, booting in to Arch worked perfectly.

I could not avoid upgrading the CPU any longer. Accessing the CPU on this machine requires far more fiddling with cables and fragile bits than I like (see this video). Sure enough, I am no longer getting sound from the speakers (it took me four days to realize this, because I mute them anyway), but I am glad I did it. As you can see from the photos, I found large ponds of thermal paste around both the CPU and the GPU. Clearly, they hadn’t caused any problems all these years, but it did feel good cleaning around those gray gobs. At some point, I’ll open the thing back up and figure out which cable I forgot to connect. That might also help me figure out why I ended up with an extra screw ;-) 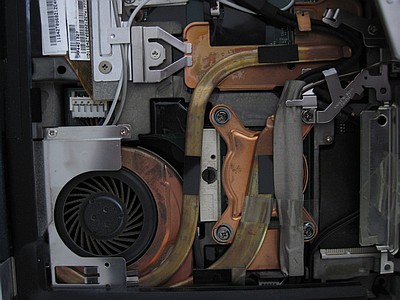 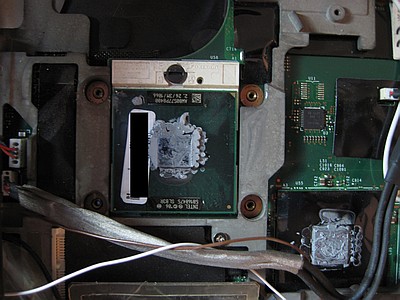 Another nice thing is that, just like the 3000 before it, the T400 comes with a builtin modem which is important to me: I end up having to fax stuff from all sorts of places. Yes, I could use an email to fax gateway, but I have been burned several times by those not getting dimensions right or doing all sorts of funky things. Windows Fax has always worked well for me.

On the down side, I had gotten so accustomed to having SD cards readers on laptops that I completely forgot to check if this model did. Of course, it doesn’t. Luckily, I had a little USB dongle thingy in a drawer, so it wasn’t the end of the world. On the other hand, this thing does have two PC Card slots — now that’s blast from the past. They’ll remain empty for now as a SD to PC Card adapter costs almost as much as what I paid for the T400.

If you find yourself looking for ancient laptops in good condition, do take a look at the stock offered by Goodwill Maine. They have reasonable prices and great customer support. If you find what you are looking for, you’d also be supporting a good cause.

Update: It turns out the lack of sound from the speakers had a simpler explanation: Windows does not change the displayed volume state when the hardware mute button is pressed, but the speakers do get muted. There is probably a driver for this, but I am not going to install it because I am trying to minimize the amount of Lenovo stuff installed.